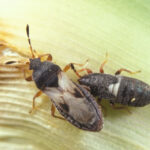 Chinch Bugs have piercing-sucking mouthparts and they feed on the sap of grass plants. They reside in the thatch area of the turfgrass, and prefer to feed on the lower leaf sheath and crown area of the plant. The chinch bug can be a major insect pest on home lawns throughout the country. The chinch bug inserts its straw-like mouthparts into the plant tissue and sucks out the plant juices while injecting chemicals into the plant which clog the vascular system. The area around the feeding puncture usually turns yellow. Damaged areas first appear as small, irregular patches which enlarge as the insects spread. Chinch bugs are most damaging in open, sunny areas.

Chinch bug damage also can be difficult to distinguish from that caused by drought. Detection of significant numbers of the insects themselves is the best proof that chinch bugs are the cause of the damage.

Examine the grass in the marginal areas of injured patches, not in the clearly dead grass. Spread the grass gently with your fingers and look in the thatch, near the soil surface. Chinch bugs are usually very active in the summer, so you will be able to see them scurrying around, especially on warm summer days. Chinch bugs are found most readily in the weakened, yellowing grass around a dead spot in the lawn.

Treating the infested area with Talstar Granular, Talstar Pro, or Tempo SC will give you excellent residual control.

– These concentrates are mixed with water and used in a compressed hand held sprayer to make your application.

These “ready to use” granular crystals are convenient and great for a contact kill and have a great residual properties for the exterior. They fall down into and under landscape material such as turf, rock or mulch to target problem pests.

Keeping thatch to a minimum, for example, reduces chinch bug numbers and makes other control methods more effective. Thatch is the layer of dead plant material found between the green tops of the grass plant and the soil below. Thatch provides a protective home for chinch bugs, and chemically binds with many insecticides, making such controls less effective.