Moles have a hairless, pointed snout and small eyes. For the most part, moles live in seclusion and underground burrows and rarely come to the surface. These mammals are solitary and rarely do more than 2 or 3 moles occupy the same burrow system.

There are seven North American mole species: the eastern mole, hairy-tailed mole, star-nosed mole, broad-footed mole, Townsend’s mole, coast mole, and shrew mole. The most wide-ranging is the eastern mole, which is found from eastern Texas, north to southern South Dakota and eastward to the Atlantic Ocean.

These mammals are classified as insectivores and their principle diet consists of live earthworms, grubs, beetles, ants and other insect larvae. Their appetite is voracious, and they usually eat more than their weight in food every day. Moles can be destructive pests in lawns, gardens, nurseries, parks, golf courses and cemeteries. 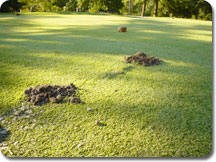 This animal, in its search for food, burrows in lawns and other areas where soil conditions are suitable. Moles are very active tunnelers and can tunnel at a rate of 12 to 15 feet per hour. In spring and fall, these burrows are just a few inches below the surface with the soil pushed up into ridges. In summer and winter, burrows are deeper with the only evidence being mounds of soil pushed up to the surface. Both types of burrows produce damage to the lawn or garden. Moles seldom feed on plant materials; however, mice may follow mole burrows damaging bulbs and plant roots.

Control mole activity with Kaput Mole Gel Bait.  Kaput can be applied anytime new burrows or tunnels are noticed. Early spring is usually when the first burrows are seen or after the first fall rains. Making applications in the early spring can eliminate pregnant females, thus reducing the possibility of having to contend with a family of moles. All burrows are not in use all the time. Find active burrows by rolling or tramping down the ridges and then observe which ones are raised again. These are the ones where applications should be made.

Because of the extensive tunneling and length of the tunnels, it may appear that many moles occupy an area. Moles dig elaborate tunnel systems and have feeding runways barely beneath the grass.

e is elevated and easily visible. The tunnel system will have many yards of traveling tunnels within several inches of the ground surface. As the weather cools, moles will retreat into their deeper tunnels, up to 5 feet beneath the surface.

For the most part, baits have been ineffective due to their grain-based material. Since moles are insectivores, grain baits and pellets are unattractive to them. Kaput Mole Gel Bait in the only formulation that is actually attractive to moles.  Gas cartridges or smoke bombs are ineffective because they wont be able to diffuse into the entire burrow system. Kaput is a product that works great.

HOW TO APPLY IT

Designed and developed by Bell Labs, Talpirid is a mole bait in the formulation of a worm. It has been proven effective through both lab and field efficacy studies. Killing moles that consume a single piece of bait, Talpirid is showing success at a single application rate of 1.4kg/ha. Talpirid comes in a convenient tray of 10 worms which release freely from the tray, ready for immediate placement. Trays are individually sealed in a bag for ultimate freshness and maximum shelf life.

To use, PMPs place the trap jaws in an active mole tunnel and step on the trap’s yellow foot pedal which sets the trigger below the surface. The trap has a low profile, when set, as it sits close to the ground. The yellow foot pedal springs up making notification of capture easy and safe.