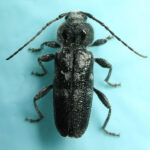 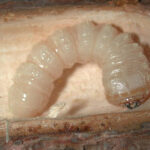 Larvae of the old house borer feed on seasoned softwoods and prefer the sapwood portions of pine, spruce and fir. Sometimes larvae are serious pests in modern log homes as well as conventional homes. Houses less than 10 years old are primarily attacked contrary to the name of old house borer. Full grown larvae can be heard boring in the wood, making a rhythmic ticking or rasping sound much like the sound of a mouse gnawing. In log houses, this sound may be heard from a distance of five to ten feet, day and night, at infrequent intervals. If the larvae work close to the surface, homeowners may find blistering of the wood, boring dust on surfaces below infested timbers, powdery borings in sapwood, oval emergence holes about 1/4 inch wide on the wood surface, larvae in tunnels or beetles in the building.

Adult old house borers are beetles 5/8 to 1 inch long, slightly flattened, brownish-black with many gray hairs on the head and thorax, two prominent black bumps on the prothorax and long antennae. The thorax (segment behind the head) has a shiny ridge down the middle and a shiny raised knob on each side, appearing as a face with a pair of eyes. Wing covers are marked with whitish spots that form two irregular bands or spots near the middle. Larvae are up to 1-1/4 inches long and have tiny ocelli (black eye spots) on each side of the head. They are flesh-colored, wedge-shaped (wider at the head), and segmented with legs present. Pupae are flesh-colored and about the size of the beetle.

The biology of the beetle’s life cycle is greatly influenced by temperature, relative humidity and protein content of the wood. The adult stage is short, lasting eight to sixteen days, the egg stage about two weeks, the larval stage several years and the pupal stage two weeks. Under ideal conditions in many southern states, adults may appear after three to five years, sometimes remaining in larval tunnels for as long as 10 months before emergence. In more northern states, where humidity is low (as in some attics), an additional two to five years may be required to complete the life cycle. Adults emerge June, July and August with females attracted to dry, seasoned wood where eggs are laid reinfesting additional softwood. (Oils and resins in the heartwood portion of wood are undesirable.)

Infestations are hard to detect in the early stages since larvae are small, develop slowly the first year and there are no external signs of damage. Only in advanced stages will surface bulges become evident due to larval activity. Homeowners may hear their gnawing “clicking-like” sounds. By breaking the surface with a sharp object where tunneling is suspected, one can find tiny rod-like fecal pellets (which crumble easily) and fine, powdery material. Sometimes mines are filled loosely with granular frass, some of which may fall out and reveal the borer’s presence. The best characteristic is the striking size and cross-sectional shape of the galleries. Walls of these large oval galleries have a rippled appearance and, at their broadest dimension, larval tunnels may be 3/8 inch wide. The flight exit holes are oval-shaped, slightly flattened, corresponding to the adult beetle shape. Exit holes may be surrounded by small piles of frass and tiny pellets. Infested wood may have extensive damage, reducing the total sapwood area to a powdery frass with the outer veneer of wood left paper-thin. Materials attacked may include attic framing, floor joists, wood framing, trim, flooring, etc.

Damage depends on several factors. If the house is heated centrally, has no moisture problems from ventilation or poor drainage and does not stay closed up and unoccupied for long periods of time, infestations do not worsen significantly and reinfestations are unlikely after the first generation. It is sometimes common for a few boards in the house to be infested, resulting in very little economic damage in spite of a gnawing nuisance by a few larvae and occasional emergence by a beetle or two. However, in portions of the house with a high enough humidity to allow reinfestation, serious damage can result. Moisture contents below 10 percent cause very slow larval development and some die. Ideal development is at moisture contents of 15 to 25 percent. Larvae will even attack wood that has been air dried or kiln dried to about 25 percent moisture content. They do not infest firewood or any softwood not seasoned to some degree. The majority of infestations originate in wood containing larvae prior to construction. Larvae and adults have been found in lumberyards where structural and log-home timber were cut, dried and stored. The extent of damage depends on the proportion of sapwood to heartwood. With heating inadequate to dry out the framing timbers and high moisture present, such as in unheated storage areas or recreational structures occupied intermittently, serious damage can occur. Avoid using farm-sawed lumber of freshly cut logs unless chemical treatment has been applied.

Treating the wood directly with BORA-CARE or Totality would be an option. Bora-Care is an EPA Registered, low toxicity pesticide designed to penetrate and protect all types of wood, including plywood and composites, from infestations of wood boring insects such as termites, beetles, carpenter ants and decaying fungi.

BORA-CARE penetrates throughout the wood and leaves no toxic surface residue. BORA-CARE works by depositing an active ingredient in the wood which will not decompose or vaporize like many other pesticides. This means that it will keep providing broad spectrum protection with little impact on our environment. BORA-CARE is odorless, colorless and can be directly applied to wood surfaces.

For borates to penetrate wood, the surface must be unfinished. Therefore, joists, sills, rafters, subflooring, studs, decking and siding are all excellent candidates for treatment. Although borates will not penetrate paint or varnish, they will penetrate wood surfaces previously treated with a water-repellent stain (e.g., wood siding, decks, or log homes), provided the water-repellency is broken down by pressure washing prior to treatment. An infested wood floor can likewise be treated with borates, but would first need to be sanded to remove the finish.

Applications with a residual liquid might also be an option.  Several pyrethroid insecticides are labeled for application as surface treatments.  A spot or surface treatment may not provide immediate control of wood-infesting beetle larvae, but should control adult beetles as they emerge and prevent reinfestation by killing first instar larvae before they enter the wood.  Check product labels for specifics.  Aerosols & Ready To Use Products, Spray Concentrates, Dust Insecticides