There are several species of cockroaches throughout the United States. Click on your roach below to see more information on identification, pictures, habits, and recommended products and procedures. You will find descriptions and recommendations for control of the more common household roaches including The American Roach, Oriental Roach, German Roach, and the Brown Banded Roach. The American and Oriental Roaches are often referred to as ‘waterbugs’ or ‘palmeto bugs’. Cockroaches are under the order, Blattodea. 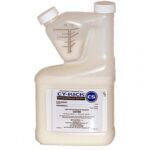 The choices are widespread for roach control both indoors and out. Indoors, roaches can be controlled using baits, dusts, or residual insecticides. A combination of products can always be used. For example, to keep roaches from coming inside, you could treat the exterior with a roach spray such as Tempo or CyKick. On the interior you could try using a baits, and glueboards. Or if you wanted to get a bit more aggressive, you could dust voids or cracks and crevices

The German cockroach is the most prolific of the roaches. It is small, dark brown with two distinct black stripes on its thorax. Consider non-repellant insecticides or a fantastic bait such as Alpine Roach Gel. Pheromone traps will help you monitor your progress.

When treating for roaches, make your applications according to label directions, and as close to where cockroaches are hiding as is possible. Even the best insecticides will not be effective if roaches are not exposed to them or do not discover bait placements.

Size: Both male and female are about one inch in length. Color: The female is all black, while the male has two brown wings. The Oriental cockroach is a pest in homes throughout much of the United States and is often referred to as a ‘waterbug’. During the summer, oriental cockroaches can be seen outdoors where they may venture into neighboring buildings. During the colder months, they reinvade homes, establishing themselves in basements and crawl spaces. 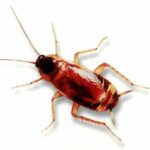 Like all cockroaches that invade buildings, this species prefers to spend much of its time resting in cracks and voids. Most of its activity will occur at night when it feels safe to move about in search of food and water. The brown banded cockroach does not seem to require as much moisture as German cockroaches, and therefore may be found in rooms other than kitchens and bathrooms.